In May of 2008, the California Supreme Court concluded that underthis State’s Constitution, the right to marry a person of one’s choiceextended to all individuals, regardless of sexual orientation, and wasavailable equally to same-sex and opposite-sex couples.

In November of 2008, the voters of California responded to thatdecision with Proposition 8, amending the State’s Constitution and, onthe basis of sexual orientation and sex, slammed the door to marriageto gay and lesbian citizens.

The plaintiffs are two loving couples, American citizens, entitledto equality and due process under our Constitution.  They are in deeplycommitted, intimate, and longstanding relationships.  They want tomarry the person they love; to enter into that “most important relationin life”; to share their dreams with their partners; and to confer themany benefits of marriage on their families.

But Proposition 8 singled out gay men and lesbians as a class, sweptaway their right to marry, pronounced them unequal, and declared theirrelationships inferior and less-deserving of respect and dignity.

In the words of the California Supreme Court, eliminating the rightof individuals to marry a same-sex partner relegated those individualsto “second class” citizenship, and told them, their families and theirneighbors that their love and desire for a sanctioned maritalpartnership was not worthy of recognition.

During this trial, Plaintiffs and leading experts in the fields ofhistory, psychology, economics and political science will prove threefundamental points:

Second – By denying gay men and lesbians the right to marry,Proposition 8 works a grievous harm on the plaintiffs and other gay menand lesbians throughout California, and adds yet another chapter to thelong history of discrimination they have suffered.

MARRIAGE IS THE MOST IMPORTANT RELATION IN LIFE

Plaintiffs will present evidence from leading experts, representingsome of the finest academic institutions in this country and the world,who will reinforce what the highest courts of California and the UnitedStates have already repeatedly said about the importance of marriage insociety and the significant benefits that marriage confers on couples,their families, and the community.  Proponents cannot dispute thesebasic facts.

While marriage has been a revered and important institutionthroughout the history of this country and this State, it has alsoevolved to shed irrational, unwarranted, and discriminatoryrestrictions and limitations that reflected the biases, prejudices orstereotypes of the past.  Marriage laws that disadvantaged women orpeople of disfavored race or ethnicity have been eliminated.  Thesechanges have come from legislatures and the courts.  Far from harmingthe institution of marriage, the elimination of discriminatoryrestrictions on marriage has strengthened the institution, itsvitality, and its importance in American society today.

PROPOSITION 8 HARMS GAY AND LESBIAN INDIVIDUALS, THEIR CHILDREN AND THEIR COMMUNITIES

Proposition 8 had a simple, straightforward, and devastatingpurpose:  to withdraw from gay and lesbian people like the Plaintiffstheir previously recognized constitutional right to marry.  Theofficial title of the ballot measure said it all: “Eliminates Right ofSame-Sex Couples to Marry.”

Proponents of Proposition 8 have insisted that the persons theywould foreclose from the institution of marriage have suffered no harmbecause they have been given the opportunity to form something called a“domestic partnership.”  That is a cruel fiction.

Plaintiffs will describe the harm that they suffer every day becausethey are prevented from marrying.  And they will describe how demeaningand insulting it can be to be told that they remain free to marry—aslong, that is, that they marry someone of the opposite sex instead ofthe person they love, the companion of their choice.

And the evidence will demonstrate that relegating gay men andlesbians to “domestic partnerships” is to inflict upon them badges ofinferiority that forever stigmatize their loving relationships asdifferent, separate, unequal, and less worthy—something akin to acommercial venture, not a loving union.  Indeed, the proponents ofProposition 8 acknowledge that domestic partnerships are not the sameas traditional marriage.  Proponents proudly proclaim that, underProposition 8, the “unique and highly favorable imprimatur” of marriageis reserved to “opposite-sex unions.”

This government-sponsored societal stigmatization causes gravepsychological and physical harms to gay men and lesbians and theirfamilies.  It increases the likelihood that they will experiencediscrimination and harassment; it causes immeasurable harm.

Sadly, Proposition 8 is only the most recent chapter in our nation’slong and painful history of discrimination and prejudice against gayand lesbian individuals.  They have been classified as degenerates,targeted by police, harassed in the workplace, censored, demonized,fired from government jobs, excluded from our armed forces, arrestedfor their private sexual conduct, and repeatedly stripped of theirfundamental rights by popular vote.  Although progress has occurred,the roots of discrimination run deep and its impacts spread wide.

PROPOSITION 8 HARMS GAY AND LESBIAN INDIVIDUALS FOR NO GOOD REASON

Proposition 8 singles out gay and lesbian individuals alone forexclusion from the institution of marriage.  In California, evenconvicted murderers and child abusers enjoy the freedom to marry.  Asthe evidence clearly establishes, this discrimination has been placedin California’s Constitution even though its victims are, and alwayshave been, fully contributing members of our society.   And it excludesgay men and lesbians from the institution of marriage even though thecharacteristic for which they are targeted—their sexualorientation—like race, sex, and ethnicity, is a fundamental aspect oftheir identity that they did not choose for themselves and, as theCalifornia Supreme Court has found, is highly resistant to change.

The State of California has offered no justification for itsdecision to eliminate the fundamental right to marry for a segment ofits citizens.  And its chief legal officer, the Attorney General,admits that none exists.  And the evidence will show that each of therationalizations for Proposition 8 invented by its Proponents is whollywithout merit.

“Procreation” cannot be a justification inasmuch as Proposition 8permits marriage by persons who are unable or have no intention ofproducing children.   Indeed, the institution of civil marriage in thiscountry has never been tied to the procreative capacity of thoseseeking to marry.

Proposition 8 has no rational relation to the parenting of childrenbecause same-sex couples and opposite sex couples are equally permittedto have and raise children in California.  The evidence in this casewill demonstrate that gay and lesbian individuals are every bit ascapable of being loving, caring and effective parents asheterosexuals.  The quality of a parent is not measured by gender butthe content of the heart.

And, as for protecting “traditional marriage,” our opponents “don’tknow” how permitting gay and lesbian couples to marry would harm themarriages of opposite-sex couples.  Needless to say, guesswork andspeculation is not an adequate justification for discrimination.  Infact, the evidence will demonstrate affirmatively that permittingloving, deeply committed, couples like the plaintiffs to marry has noimpact whatsoever upon the marital relationships of others.

When voters in California were urged to enact Proposition 8, theywere encouraged to believe that unless Proposition 8 were enacted,anti-gay religious institutions would be closed, gay activists wouldoverwhelm the will of the heterosexual majority, and that childrenwould be taught that it was “acceptable” for gay men and lesbians tomarry.  Parents were urged to “protect our children” from thatpresumably pernicious viewpoint.

At the end of the day, whatever the motives of its Proponents,Proposition 8 enacted an utterly irrational regime to governentitlement to the fundamental right to marry, consisting now of atleast four separate and distinct classes of citizens:  (1)heterosexuals, including convicted criminals, substance abusers and sexoffenders, who are permitted to marry; (2) 18,000 same-sex couplesmarried between June and November of 2008,  who are allowed to remainmarried but may not remarry if they divorce or are widowed; (3)thousands of same-sex couples who were married in certain other statesprior to November of 2008, whose marriages are now valid and recognizedin California; and, finally (4) all other same-sex couples inCalifornia who, like the Plaintiffs, are prohibited from marrying byProposition 8.

There is no rational justification for this unique pattern ofdiscrimination.  Proposition 8, and the irrational pattern ofCalifornia’s regulation of marriage which it promulgates, advances nolegitimate state interest.  All it does is label gay and lesbianpersons as different, inferior, unequal, and disfavored.  And it brandstheir relationships as not the same, and less-approved than thoseenjoyed by opposite sex couples.  It stigmatizes gays and lesbians,classifies them as outcasts, and causes needless pain, isolation andhumiliation.

Here is Ted Olson's opening statement in the federal challenge to Prop 8, as prepared: 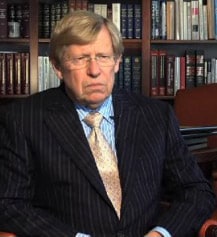 This case is about marriage and equality.  Plaintiffs are beingdenied both the right to marry, and the right to equality under the law.

The Supreme Court of the United States has repeatedly described theright to marriage as “one of the vital personal rights essential to theorderly pursuit of happiness by free men;” a “basic civil right;” acomponent of the constitutional rights to liberty, privacy,association, and intimate choice; an expression of emotional supportand public commitment; the exercise of spiritual unity; and afulfillment of one’s self.

In short, in the words of the highest court in the land, marriage is“the most important relation in life,” and “of fundamental importancefor all individuals.”

As the witnesses in this case will elaborate, marriage is central tolife in America.  It promotes mental, physical and emotional health andthe economic strength and stability of those who enter into a maritalunion.  It is the building block of family, neighborhood andcommunity.  The California Supreme Court has declared that the right tomarry is of “central importance to an individual’s opportunity to livea happy, meaningful, and satisfying life as a full member of society.”

Proposition 8 ended the dream of marriage, the most importantrelation in life, for the plaintiffs and hundreds of thousands ofCalifornians.