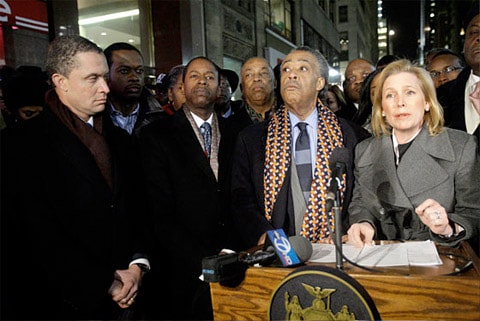 Harold Ford Jr. and Kirsten Gillibrand, whose potential forthcoming battle for a NY Senate seat has begun to play itself out in the news in recent days, showed up at the same place yesterday.

New York mag's Daily Intel reports: "…just as things started to get testy between the two, they both showed
up to Al Sharpton's press conference on the Haitian earthquake relief
efforts, where the awkwardness, area metaphysicists report, was nearly
intense enough to create a tear in the space-time continuum."

Previous Post: « Madonna Has a Secret Son and He’s Here to Bleed About It
Next Post: Internal Pentagon Memo: ‘Hold Off’ on ‘Don’t Ask, Don’t Tell’ Repeal »