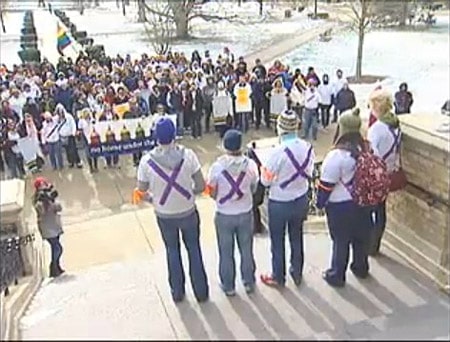 Following the publication of an anti-gay cartoon advocating gay bashing that recently appeared in the independently published Notre Dame paper, hundreds of students marched through campus on Wednesday to deliver a letter to University President Father John Jenkins.

Read the letter, in part: “Father Jenkins, when the University refuses to acknowledge club status for alliance and refuses to add sexual orientation to the non-discrimination clause, we are reminded of our other-ness"

The students said their march was not a direct response to the cartoon but was certainly "spurred on" by it, WSBT reports.

Students were stopped at the doors to the Golden Dome, where they were to deliver their letter, and weren't allowed in. After a long period of waiting, an administrative assistant to the President finally came out and accepted it.

Watch a report, with interviews, AFTER THE JUMP…