If tabloid reports from Ottawa are accurate: 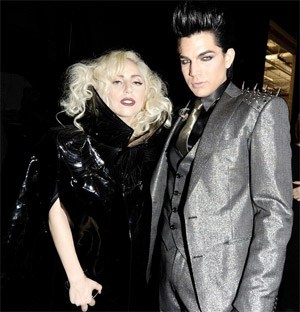 According to the National Enquirer Lady Gaga was
partying with friends when a drunken man confronted her saying; “I saw
you and Adam Lambert on the AMA show, and the guy’s a
flaming {explicit} — and I also think that you’re actually a man!”

Reportedly Gaga fired back: “Well, that’s your opinion, isn’t it? And I’m not about to waste my time trying to change it.”

The angry fan yelled back: “Well, don’t you care that you’re both going to hell!" Lady Gaga then looked at him and said;  “No…not as long as I don’t have to see your face there!”

The
intoxicated man replied; “Well You're a freak and so is he!" Before
Gaga left she stated; “Okay, that’s it! Call me anything you want, but
when you start calling my friends names, it’s over -it's war!” Lady
Gaga then reportedly poured a glass of water on the drunken man and
then swiftly left the club.

She better have a hose ready for the Phelps clan.