Christian warrior and Oklahoma lawmaker Sally Kern, who once declared gays more of a threat to America than terrorists, has set her sights on outlawing some forms of heterosexual divorce: 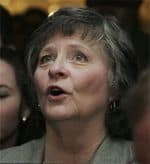 Scheduled for introduction in the 2010 legislative session by state
Rep. Sally Kern, R-Oklahoma City, House Bill 2279 would restrict the
“use of incompatibility as a ground for divorce” in Oklahoma.

The bill would not allow for divorce on the basis of incompatibility if:

If passed, the act would become effective on Nov. 1.