A Supreme Court ruling on campaign spending limits was just handed down: 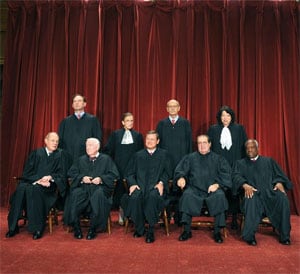 "By a 5-4 vote, the court on Thursday overturned a 20-year-old ruling that said corporations can be prohibited from using money from their general treasuries to pay for their own campaign ads. The decision, which almost certainly will also allow labor unions to participate more freely in campaigns, threatens similar limits imposed by 24 states.

It leaves in place a prohibition on direct contributions to candidates from corporations and unions.

Critics of the stricter limits have argued that they amount to an unconstitutional restraint of free speech, and the court majority apparently agreed."