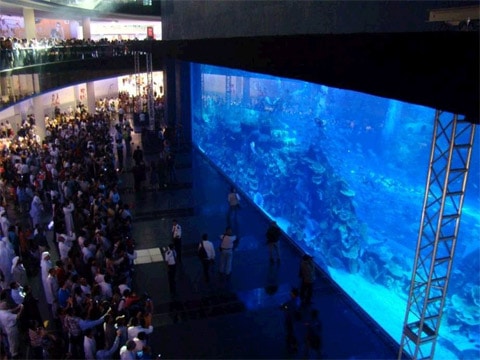 The Dubai Mall Aquarium, one of the largest tanks in the world, developed a crack on Thursday and was evacuated, Reuters reports:

"One of the largest tanks in the world, the aquarium features the world's largest viewing panel at 32.8 meters (107 ft 7 in) wide and 8.3 meters high.It was designed to hold more than 33,000 living animals, representing more than 85 species including over 400 sharks and rays combined, according to Dubai Mall's website.A Reuters witness said the mall, operated by Emaar Properties, had been partly evacuated and dozens of emergency vehicles were outside. Six divers entered the tank and appeared to be coordinating with workers outside the glass. Laborers mopped up water from the floor."

That would have me just a little bit concerned.

Video of the aquarium's unveiling in late 2008 and water gushing from the tank today,
AFTER THE JUMP…