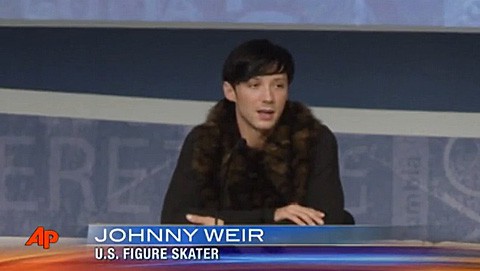 Johnny Weir held a press conference in Vancouver yesterday in response to controversy that has arisen in Quebec and elsewhere over remarks made by sportscasters about his persona and his costumes.

Said Weir: "I'm not somebody to cry over something or to be weak about something. I felt very defiant when I saw these comments. It wasn't these two men criticizing my skating, it was them criticizing me as a person, and that was something that really, frankly, pissed me off…I hope more kids can grow up the same way I did and more kids can feel the freedom that I feel to be themselves and to express themselves and that's the most important thing."

The skater added: "I'm always thought of the sparkly flamboyant character that wore a crown of roses…nobody knows me. I think masculinity is what you believe it to be. To me, masculinity is all my perception. I think masculinity and femininity is something that's very old fashioned. There's a whole new generation of people that aren't defined by their sex or their race or who they like to sleep with. I think as a person you know what your values are and what you believe in and I that''s the most important thing."

As an addendum, Weir tweeted the remark inset above before heading off to sleep last night.

Watch his press conference, AFTER THE JUMP…