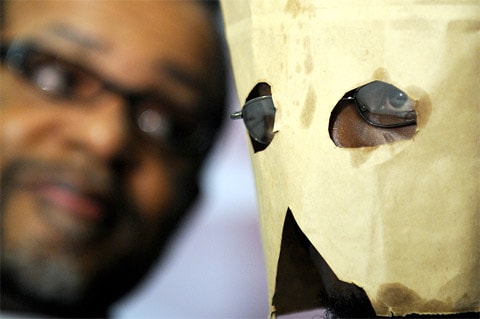 A gay Ugandan man seeking asylum in the United States wore a bag over his head at a press conference for 'The American Prayer Hour', a multi-city tour in response to the National Prayer Breakfast.

The group writes: "While The National Prayer Breakfast is ostensibly a benign event, it is hosted by a secretive fundamentalist organization, The Family, which is directly tied to the draconian 'Kill the Gays' bill in Uganda. We strongly urge those invited to the National Prayer Breakfast to reconsider attending the event. Instead, they can join us at our American Prayer Hour."

Wayne Besen has more on the young man in the mask:

We had two different size bags, and he tried on each, as if they were
shirts at an Old Navy store. We had to ensure that it was a snug fit,
lest it fall off, reveal his identity and put his life in jeopardy.

It had been a three-day trek by car for Moses and a friend to get to
Washington. This heroic journey would not end in magazine covers, book
deals or fame as a talking head on the cable networks. All Moses had to
gain was the opportunity to share the truth in anonymity, and he did so
with remarkable equanimity.

As Moses stood in front of the podium, the juxtaposition of the
American flag and this courageous young man wearing a bag to blur his
humanity was jarring. I felt pride for living in a free country where we
could hold a press conference to denounce The Family’s role in Uganda.
But, there was also shame that America, famous for its innovation, had
been exporting a virulent and violent strain of religious extremism to
far away lands.