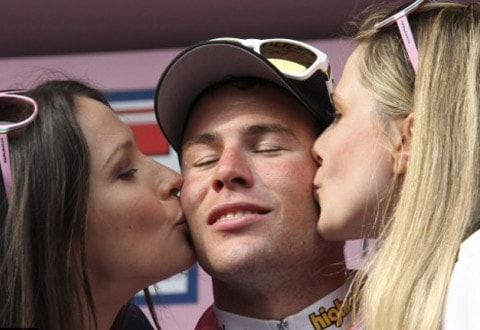 A tradition in the Giro d'Italia European bike race is to have the winner kissed on both cheeks by two women. Members of Amsterdam's Green Left Party are lobbying for the kiss to be given by two gay men on the Amsterdam leg of the race, the AP reports:

"The idea is winning support in this notably tolerant city, which annually hosts one of the world's most elaborate gay pride parades. But Albert van der Meulen, whose television station is arranging the ceremony, said he'd rather have women on the podium.

'I don't even think the race participants want to be kissed by men,' van der Meulen said.

The station has arranged a beauty contest March 5 to select two people to present the flowers to the winner of the Amsterdam leg. Most entrants are young women, but van der Meulen confirmed three are gay men.

The municipality of Amsterdam says it will support whoever wins."

A city spokesman and gay groups are supporting the suggestion. The bike race begins May 8.