On Sunday, the SF Chronicle "outed" Prop 8 trial Judge Vaughn Walker (at least, was the first mainstream media to do so — it was an "open secret" as they said). In the article, it was predicted that Walker would be attacked for having bias in the case.

We have no idea whether the report is true or not. But we do know one
really big important fact about Judge Walker: He’s been an amazingly
biased and one-sided force throughout this trial, far more akin to an
activist than a neutral referee. That’s no secret at all.

Protect Marriage, the defendants in this case are effectively being
held hostage by Judge Walker and cannot really comment.

Walker has presided over a show trial designed to generate sympathetic
headlines and news coverage for gay marriage supporters. Witness after
witness was allowed to testify about their “expert” opinion that
homosexuals have been discriminated against, that they feel badly when
society does not validate their relationships, and that the passage of
Prop 8 was simply an echo of historic prejudice and bigotry foisted on
society by religious zealots.

Judge Walker’s bias has been so extreme, he’s earned a rare judicial
“twofer.” Key elements of his “fishing expedition” rulings were already
reversed by the Ninth Circuit Court of Appeals (notably one of the most
liberal in the nation) and the Supreme Court had to step in to block his
illegal attempt to broadcast the trial.

It is highly unusual for a higher court to have to intercede in a
trial judge’s handling of a trial while it is going on — yet Walker has
had that “distinction” twice in the same case — and we’re not yet even
at closing arguments.

There’s only one saving grace to Judge Walker’s bias. It’s so big,
and so obvious, not only the American public but the Supreme Court
itself is already aware we have bias in the trial judge presiding. 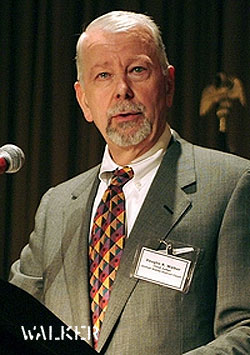 The SF Chronicle came out today in defense of Walker's impartiality:

Today, at age 65, Judge Walker is presiding over the challenge to
Proposition 8, which may well determine how quickly gays and lesbians
achieve full marriage equality in this country. We now know what Walker
never bothered to reveal when he was being castigated as anti-gay: He is
gay, which changes neither his legal history nor his fitness for this
assignment.

A judge's sexual orientation does not inherently shade his ability to
read and interpret the U.S. Constitution with clear-eyed wisdom.
Assuming this case advances on appeal, no matter how Walker rules, there
almost certainly will be jurists who will need to set aside their
religion's teachings – and, quite likely, the impact of their ruling on
close friends or even a family member – as they do their utmost to
uphold the meaning of the Constitution.

Walker did not think his private life was relevant to his ability to
preside with fairness in the Prop. 8 trial. There is nothing in his long
and laudable career to suggest otherwise.

And Chronicle columnist Debra Saunders asks, "Does Walker have a conflict?"

Until Sunday, it seemed inevitable that however Walker ruled, the
losing side would bring up his sexual orientation. If he overturned the
measure, losers would hit the conservative media to argue that with a
gay judge presiding, the fix was in from the start. If Walker upheld the
measure, angry gay activists would denounce him as a self-loathing
turncoat.

Now, whatever Walker decides, the public can't complain that he had a
sub rosa agenda.

Walker is not a predictable man. As a private attorney, he tangled
with San Francisco's Gay Olympics to protect the U.S. Olympic
Committee's brand name. Appointed to the bench by President George H.W.
Bush, Walker's libertarian streak has led him to advocate legalizing
drugs.

But I still wonder if he should have recused himself from this case.

There are strong reasons not to. After all, at The Chronicle, gay
reporters can and do cover gay issues with the advantage of personal
insight. Some might claim that they are biased, but it's not as if there
is a neutral identity – straight? white? male? – that is free from
bias.

And where does it end? Should a Mormon judge have to recuse himself? A
devout Catholic?

A lawyer friend explained to me that a federal judge constantly has
to preside over cases argued by former associates and friends, yet the
expectation of impartiality remains. To recuse oneself because of broad
identity issues, this lawyer argued, would be to admit to being
influenced by extra-legal considerations.

I've got a bad feeling we'll never hear the end of this.