In an interview with Lisa Keen, Rep. Barney Frank offers some timing on a possible House vote on the Employment Non-Discrimination Act (ENDA): 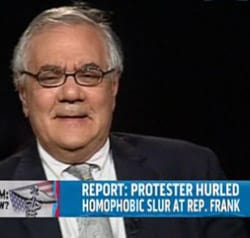 "A bitterly divided U.S. House of Representatives approved the Senate health care reform bill late Sunday night, a bill that promises to provide long-sought health care to millions of Americans who have not been able to afford it and protect the coverage of those who already have it.While Rep. Barney Frank (D-Mass.) said Monday he is 'disappointed in some aspects' of the law, 'it’s a very good step forward and, in a couple of years, it’s going to be popular.'Frank said passage of the health care reform package by the House now clears the way for that chamber to take up ENDA. He said the vote could come as early as this week but would more likely come right after the spring recess, March 29-April 9."

Said Frank: "There was a great deal of shouting, you know, waving of fists and signs, and sort of people getting very close and yelling. And a number of the comments were homophobic…. What occurs to me is, there are kids all over the country watching this, not as a game but as real life. And watching so-called respectable politicians cheering them on. And that was just discouraging, that at this point in our history, we couldn't have a rational debate with these kind of thug tactics that were being used.''