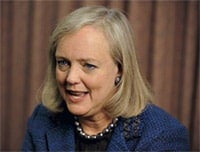 California gubernatorial GOP front-runner Meg Whitman gave an interview to the Mercury News in which she was asked about some of her positions on gay rights:

"Asked to reconcile her stance against same-sex marriage with her willingness to allow gays and lesbians to adopt children, Whitman said she believes the term 'marriage' should apply only to the union of a man and a woman. Still, she's in favor of granting equal rights to gay people through civil unions and domestic partnerships.
And she approves letting gays adopt because 'many kids need a great home.'"