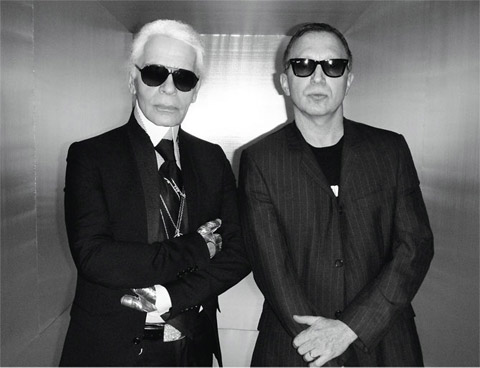 An interview with Chanel designer Karl Lagerfeld by filmmaker Bruce LaBruce in the current issue of VICE magazine touches briefly on the subject of same-sex marriage. Lagerfeld doesn't believe in it.

LABRUCE: You are against the idea of gay marriage. I totally agree with you on that.
LAGERFELD: Yes, I’m against it for a very simple reason: In the 60s they all said we had the right to the difference. And now, suddenly, they want a bourgeois life.

LABRUCE: It’s normalizing.
LAGERFELD: For me it’s difficult to imagine—one of the papas at work and the other at home with the baby. How would that be for the baby? I don’t know. I see more lesbians married with babies than I see boys married with babies. And I also believe more in the relationship between mother and child than in that between father and child.

LABRUCE: I take it you don’t want children.
LAGERFELD: If I were interested in children, I would be a godfather—or a godmother. I don’t like the idea of taking people out of their lives and their contexts. If there were a child I wanted to adopt, I would try to find the family of the child and give them the money for an education in his life and his context.

Lagerfeld also says he is ignorant of homophobic violence: "I never met anything like this in my life. I had an overprotected life. What can I fight about? I don’t know what to do. It never happened to me, and it never happened to people I know."