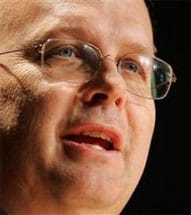 It's been reported for years that the man who Karl Rove grew up knowing as his father and later found out was actually his stepfather was gay. He has released a new book called "Courage and Consequences" (The Washington Post says about the work: "Rove has fashioned a portrait of the Bush presidency that aims to shape history in his boss's favor") he writes about his father's sexual orientation. An excerpt from the Post's review:

"He blasts journalists for raising the issue at all — in his eyes it's purely a liberal gambit to criticize him for his views on homosexuality. Rove launches a well-honed rebuttal — a skill learned long ago, no doubt, on the high school debate team — that comes across as part analysis and part dismissal. 'Could Dad have been gay?' he asks, acknowledging that his stepfather had gay friends and volunteered at an AIDS project. 'To this day, I have no idea if my father was gay. And, frankly, I don't care. He was my father, with whom I had a wonderful relationship and whom I loved deeply.'"