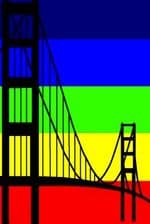 The three men from California who shot a man leaving a club in San Francisco with a BB gun last month have admitted to police that they chose him as a victim because he was gay. The city's police spokesperson says "the suspects did make a confession, basically stating that they came to San Francisco to target gay people."

The men are free after posting their $50,000 bail and police are encouraging anyone who may have experienced a similar attack to call the SF Police Department's hate crimes unit at (415) 553-1133.