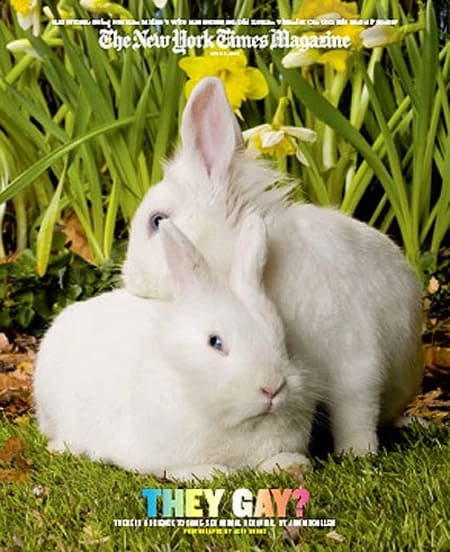 Choire Sicha reports that the NYT has a magazine cover story coming up this weekend about gay animals: "Contributing writer Jon Mooallem explores homosexual activity amongst albatrosses at Kaena Point, Hawaii….But studying these activities may have implications beyond animals; for many, it’s a reflection of what humans perceive as 'natural,' a validation or a denunciation of our own behavior."

Sicha reports the cover was shot by Jeff Koons, and has plenty to say about it.

"Various forms of same-sex sexual activity have been recorded in more than 450 different species of animals by now, from flamingos to bison to beetles to guppies to warthogs. A female koala might force another female against a tree and mount her (see here and here), while throwing back her head and releasing what one scientist described as 'exhalated belchlike sounds.' Male Amazon River dolphins have been known to penetrate each other in the blowhole."