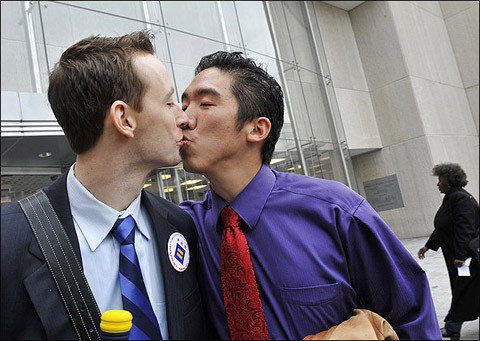 Washington Post Ombudsman Andrew Alexander today defended a photo by staff photographer Bill O'Leary which appeared on the front page of the paper, with the following caption: "Two happy couples express their enthusiasm as the District begins taking applications for marriage licenses from same-sex couples. At top are Jeremy Ames, left, and Taka Ariga. Above are Cuc Vu, left, and Gwen Migita."

Alexander said the letters expressing outrage over the photo have not stopped coming:

Many threatened to cancel their Post subscriptions, and more than two dozen did. Post circulation vice president Gregg Fernandes said that late last week 27 subscribers canceled, specifically citing the photo. In contrast, The Post reported only two cancellations immediately after last July’s ethics uproar over its ill-advised plan to sell sponsorships to off-the-record “salon” dinners at the publisher’s residence.

Did the Post go too far? Of course not. The photo deserved to be in newspaper and on its Web site, and it warranted front-page display.

News photos capture reality. And the prominent display reflects the historic significance of what was occurring. The recent D.C. Council decision to approve same-sex marriage was the culmination of a decades-long gay rights fight for equality. Same-sex marriage is now legal in the District. The photo of Ames and Ariga kissing simply showed joy that would be exhibited by any couple planning to wed – especially a couple who previously had been denied the legal right to marry.

There was a time, after court-ordered integration, when readers complained about front-page photos of blacks mixing with whites. Today, photo images of same-sex couples capture the same reality of societal change.

Head over to the WaPo for some additional details on the angry letters.