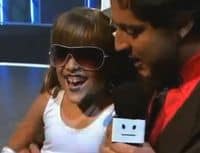 Whether they be, athletes or pop stars, kids love to emulate their idols. But there are some idols they may want to put off on emulating until they're a little older. 8-year old Laura Fontana, who appeared on some Brazilian American-Idol inspired television show performing a couple of Lady Gaga songs along with a wardrobe very much inspired by the pop singer's outfits, is a perfect example of this. I was instantly reminded of this, a shot by shot remake of Britney Spears's "Toxic" music video by a 9-year old Peruvian girl. I hope this kind of thing doesn't become a trend.

After the jump, watch Laura's performance of Lady Gaga's "Bad Romance" and "Paparazzi."