'You're So Vain' Not About David Geffen, Says Carly Simon - Towleroad Gay News 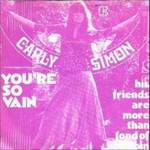 Carly Simon has told Roger Friedman at Showbiz 411 that reports her early 70's hit "You're So Vain" is about her then record producer David Geffen are wrong.

Writes Friedman:   "She emailed me last night: 'What a riot! Nothing to do with David Geffen! What a funny mistake! Someone got a clue mistaken for another mistake!'
As I wrote in the previous post about this subject, Carly did not even know David Geffen when she wrote the song in 1971.
She also writes: 'How can this guessing game stop without a lie?'
Well, one way would be to tell the real story. But why do that now and spoil all the fun?"