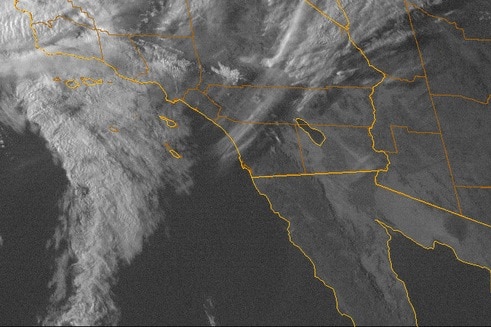 The above image is from an NOAA weather satellite and shows dust rising into the air from a powerful earthquake that hit the Baja peninsula this afternoon. Initially the quake, which struck along the California border just outside of Mexicali, Mexico, was rated a magnitude 6.9 but the intensity was quickly increased to a  7.2.

"It was the largest earthquake in the region in nearly 18 years andwas followed by aftershocks or distant "triggered" earthquakes on bothsides of the border, said U.S. Geological Survey seismologist Lucy Jones.

Otherearly reports indicated only minor damage, but communication in theregion more than 100 miles southeast of Los Angeles is often slow."

A series of quakes followed the 7.2 shake, including a 3.0 centered off the coast of Malibu.

Watch a clip of some of the shaking, AFTER THE JUMP.

Previous Post: « News: Ryan Gosling, The Pope, Justice Stevens, A Gay Cure
Next Post: Who Among You, Aside from Jake Gyllenhaal, Got an iPad? »