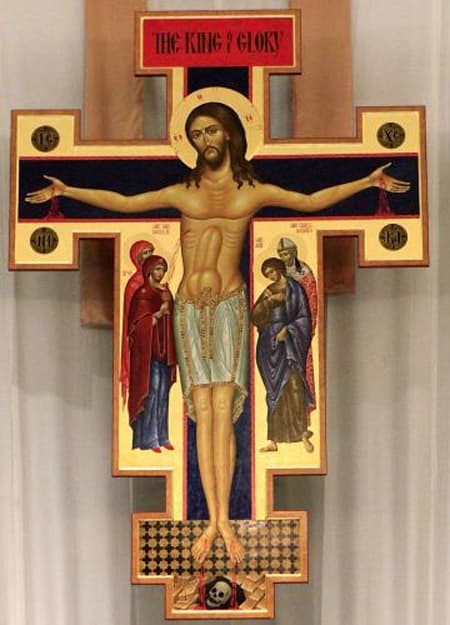 A ten-foot tall crucifix is causing controversy at a Catholic Church in Oklahoma:

"The controversial crucifix has caused a deep divide among members of St. Charles Borromeo Catholic Church, where it hangs above the main altar.
'There are a couple people who have left the parish,' said the Rev. Philip Seeton, the church’s pastor. 'There are people in the parish who don’t like it and have stayed.'
Critics of the crucifix take issue with what appears to be a large penis covering Jesus’ abdominal area. Seeton said the portion of the crucifix in question is meant to be Jesus’ abdomen 'showing distension' — not a penis.
Seeton said, 'I’ve had people who have vocally said that that’s what they see there. I’ve had people who have been just as vocal who said that’s not what they’re seeing there.'
Janet Jaime, a local iconography artist who designed the crucifix, had no comment."

The crucifix is based on the San Damiano Crucifix. As you can see, it has distended abs too.