California State Seantor Roy Ashburn, who came out of the closet earlier this year following a DUI arrest that was preceded by a visit to a gay bar, has been awarded The San Francisco Lesbian, Gay, Bisexual and Transgender Pride Committee's 'Pink Brick' award, the SF Chronicle reports: 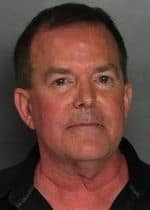 "That arrest led to a firestorm of criticism about Ashburn's sexual orientation, as he reportedly had spent the evening at a gay club that was hosting the Miss Gay Latina Sacramento competition. In the aftermath, several people said Ashburn was a regular at Sacramento gay bars. Ashburn has one of the strongest records in the Legislature of voting against gay rights bills.

He came out as gay on a Bakersfield radio program a few days later, but said on the program that he would continue voting against gay rights as that is how his constituents would have him vote.

Apparently that didn't go over too well with the Pride committee."

It's the first time the award has gone to an out gay person. Past recipients include Miss California Carrie Prejean, San Francisco Archbishop George Niederauer, Fox's Bill O'Reilly and Gov. Arnold Schwarzenegger."

Ashburn recently received a 48-hour jail sentence, probation, and a $2,000 fine for the DUI.