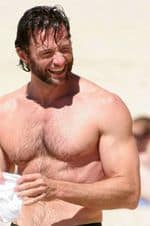 They're his own testicles, not someone else's:

"Broadway veteren Hugh Jackman is set to appear alongside Kate Winslet in a new movie by the Farrelly brothers. In the film, Jackman wil play an unfortunate man whose testicals are attached to his chin. Winslet, his date for the night, is the only person who seems to notice this oddity.

The film is the concept of There's Something About Mary director Peter Farrelly.