Satan is ghostwriting for the New York Times and tempting priests into sexual abuse, according to the exorcist from the Diocese of Rome, Father Gabriele Amorth, the Catholic News Agency reports: 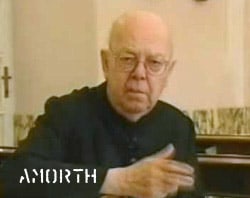 "Speaking to News Mediaset in Italy, the 85-year-old exorcist noted that the devil is behind 'the recent attacks on Pope Benedict XVI regarding some pedophilia cases.' …   'There is no doubt about it. Because he is a marvelous Pope and worthy successor to John Paul II, it is clear that the devil wants to ‘grab hold’ of him.'

Father Amorth added that in instances of sexual abuse committed by some members of the clergy, the devil 'uses' priests in order to cast blame upon the entire Church: 'The devil wants the death of the Church because she is the mother of all the saints.' …  'He combats the Church through the men of the Church, but he can do nothing to the Church.'

The exorcist went on to note that Satan tempts holy men, 'and so we should not be surprised if priests too … fall into temptation. They also live in the world and can fall like men of the world.'"