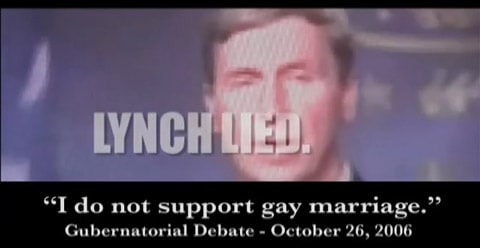 The National Organization for Marriage (NOM) has launched a $200,000 ad blitz in New Hampshire attempting to smear Governor John Lynch for his support of same-sex marriage with the pretense of going after his fiscal record. Here's the site they've set up.

Watch their ad, AFTER THE JUMP…

Ray Buckley, chair of the New Hampshire Democratic Party, responded to the campaign in a press release:

"This is a right wing group out of New Jersey that is ignoring New Hampshire law, and spreading outrageous and deliberate lies in an effort to push a message of hate and discrimination. The truth is Governor Lynch has decreased spending, kept New Hampshire's state spending the fourth lowest in the nation, and kept its taxes among the lowest in the nation. Governor Lynch's record of fiscal discipline is far better than any of his Republican predecessors, who created the business enterprise taxes, numerous other taxes, and who increased state spending an average of nearly 15 percent a biennium."

Added Buckley: "Governor Lynch's strong management also stands in stark contrast to the dismal fiscal record of Republican candidate John Stephen…This out-of-state group is lying in a desperate attempt to distract voters from John Stephen's ethical transgressions and financial mismanagement because they know he believes in their agenda of hate and discrimination…Given his own history of ethical transgressions, it's no surprise that John Stephen is embracing an organization that is not even from New Hampshire, that is under ethics investigations in three states, and is preaching a message of hate and discrimination"

The National Organization for Marriage is currently under investigation by the Maine Commission on Governmental Ethics and Election Practices; the Iowa Ethics and Campaign Disclosure Board; and the California Fair Political Practices Commission.

Support and contributions for Lynch can be directed to his website.

Watch the NOM ad, AFTER THE JUMP…