From a piece in the Huffington Post by James Moore on the Deepwater Horizon oil disaster: 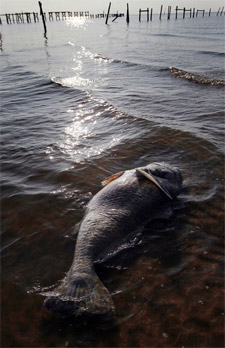 A well blowout in 1979 offers a bit of context; except the Deepwater Horizon horror show is already about to transcend what happened in the Bay of Campeche off the coast of Mexico. The Ixtoc 1 rig blew and began to spew crude that flowed uninterrupted for nine months. Before the well was capped, 3,000,000 barrels of crude had drifted north to Texas and the northern coast of Mexico. The endangered Kemps-Ridley turtle, which nests along the border beaches, had to be airlifted to safety and has only begun in recent years to recover in population.

The Ixtoc disaster, however, is spit in the ocean compared to the British Petroleum apocalypse. Estimates are the current blowout is putting 200,000 gallons or 5000 barrels of crude per day into the waters of the Gulf. Ixtoc's blowout was not capped until two relief wells were drilled and completed at the end of those nine months, and regardless of optimistic scenarios from the federal government or BP, relieving the pressure on the current flow is probably the only way to stop the polluting release of oil. The only way to relieve that pressure is with additional wells. No one is going to honestly say how much time is needed to drill such wells but consider the scope of environmental damage we are confronting if it requires at least as long as Ixtoc. Nine months of 5000 barrels of crude per day ought to turn the Gulf of Mexico into a lifeless spill pond and set toxins on currents that will carry them to deadly business around the globe.

NOAA apparently believes the situation is on the verge of getting worse. A leaked memo suggests that the tangle of pipes on the ocean floor are covering and constraining two other release points. Pressure is likely to blow those loose and, according to NOAA, the gusher will increase by "orders of magnitude." In most interpretations, that phrase means a ten-fold rise in the flow, which will replicate the Ixtoc disaster in three days.

And there are no guarantees relief wells are the fix. That is a complicated project. They are drilled to intersect the main well and then concrete is forced down the holes to seal the leaking well. What do we do, if that doesn't work? Humans cannot function at 5000 feet of ocean depth and the mitigation efforts currently are being handled by robotic remotes. What is left to us as a solution other than an explosive device, which is often what is deployed during above ground blowouts? Given the pressures reported and the amount of flow, we may need a bunker-buster nuke to be placed over the wellhead. We can then begin to talk about the water pressures caused by burst at detonation and residual radiation. Is that a better or worse situation? Certainly, aquatic life in the Gulf of Mexico is doomed unless there is a reclusive genius to step forward and save us from our great failure.

The attorney general of Texas, Greg Abbot, informed reporters that it appears Texas will escape harm. Abbot's visionary powers must exceed his legal skills since there is no way to know when and even if the well will ever be capped. In fact, if there is no plug placed in the hole, it is not inconceivable that no part of the planet's oceans will escape harm. According to the non-profit, non-partisan Air and Waste Management Association, a quart of crude oil will make 150,000 gallons of water toxic to aquatic life. BP, which has been marketing itself as an energy company "beyond petroleum," is setting loose upon the planet what is quickly turning into humankind's worst environmental disaster.

In optimistic news, BP says it has capped one of the three leaks on the well.

A report from ITN News and a recent update on where the oil is at from CNN, AFTER THE JUMP…