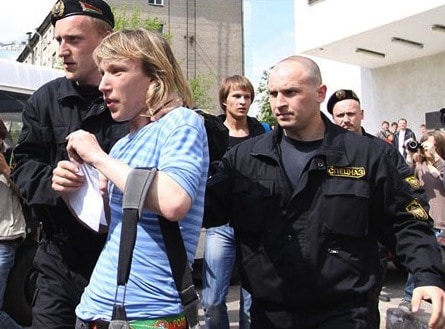 Yep, another gay pride parade in Eastern Europe ends in violence. This one in Minsk, Belarus.

The AP reports:"Riot police on Saturday broke up the demonstration and arrested severaldozen participants, beating some of them and throwing them on theground. The organizers said that their goal was to attract public attention to the violation of sexual minorities' rights in Belarus."

Marchers reportedly carried a 40 foot long rainbow flag and chanted “No to Homophobia!,” “Equal Rights, No Compromises!,” “Homophobia is a Disease!” Anti-gay protesters even threw eggs into the crowd of marchers.

UK Gay News has been in Belarus blogging in anticipation of the parade over the last couple of days. They were there when the march finally took place for all of 10 minutes and when it abruptly ended. They report: 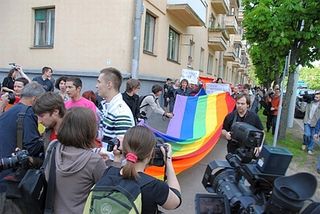 "15:08 Minsk had its gay pride march.  For just 10 minutes, 40  Belarusians and Russians waived a 12 meters long rainbow flag for a short march of approximately 200 meters.  They were at first met by a large group of journalists, photographers and TV crew.  But when they reached the first crossing point, they were trapped by several vans of anti-riot police.  Suddenly, the doors of the vans opened and anti-riot officers ran towards the participants. “I never saw anything of the kind” said Nikolai Alekseev by mobile phone.  “They were brutal and violent” he added.  Another participant who did not want to be named said: “It was like a group of wild dogs”.  The march ended with most of the participants being arrested and violently beaten.  A few managed to escape but the police ran after them."

There's remarkable footage of police aggressively ripping the 40 foot long rainbow flag out of the hands of the parade's participants and of the arrests that followed. Watch it, AFTER THE JUMP.