NY Society Loved Capote's Credo: "Don't Let The Truth Get In The Way Of A Good Story," Until He Started Telling Theirs: MOVIE - Towleroad Gay News

James St. James at WOW Report wrote about ‘The Capote Tapes’, then an anticipated documentary in 2019. It opened in theaters and festivals in 2020, and “The Capote Tapes” is now available on the digital platforms. (It’s a little hard to find which for the US other than Amazon Prime)

“From Breakfast at Tiffany’s and In Cold Blood to his trailblazing status as one of the first openly gay public figures, no author left a more indelible mark on 20th-century America than Truman Capote,” Greenwich co-managing director Andy Bohn said in a statement.”

‘Answered Prayers’ was meant to be Truman Capote’s greatest masterpiece, an epic portrait of NYC’s glittering jet-set society. Instead, it sparked his downfall.

As in the trailer, the film is compiled with moments from Capote’s visits to Dick Cavett and other talk shows of the 60s as well as more contemporary interviews with the author’s friends. Most uniquely, it includes “previously unheard audio recordings of Capote’s friends and contemporaries, drawn from interviews conducted by the late George Plimpton for his 1997 book, Truman Capote: In Which Various Friends, Enemies, Acquaintances and Detractors Recall His Turbulent Career.” according 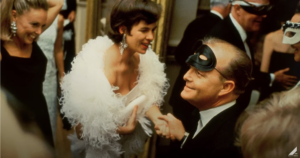