Iowa Rep. Steve King, whose ferocious work against marriage equality in Iowa you may recall, recently had a radio conversation with fellow bigot Tony Perkins of the Family Research Council about the Employment Non-Discrimination Act (ENDA). 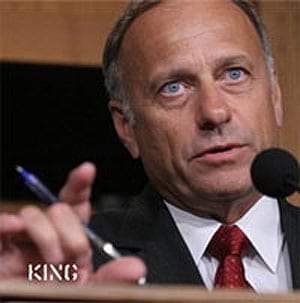 King used an little anecdote about his colleague Iowa State Senator Jerry Behn, to demonstrate why employers discriminate against gays — because they flaunt it.

Said King of Behn, who used to ask LGBT activists to guess his sexuality:

"And he said, 'let me ask you a question.' … 'Am I heterosexual or am I homosexual?' And they looked him up and down, actually they should have known, but they said, 'We don’t know.' And he said, 'Exactly, my point. If you don’t project it, if you don’t advertise it, how would anyone know to discriminate against you?' And that’s at the basis of this. So if people wear their sexuality on their sleeve and then they want to bring litigation against someone that they would point their finger at and say, 'You discriminate.' …This is the homosexual lobby taking it out on the rest of society and they are demanding affirmation for their lifestyle, that’s at the bottom of this."