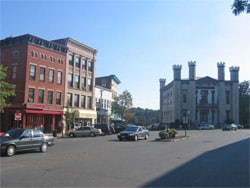 "A 20-year-old Pittsfield driver was cited by police Tuesday after she ran down Lord Jesus Christ in a marked crosswalk at Main Street and Strong Avenue, police said.

Christ, 50, of Belchertown, was taken to Cooley Dickinson Hospital for treatment of minor injuries following the 3:30 p.m. accident. He was treated at the hospital and then released.

Cantarella was making a left turn from Strong Avenue onto Main Street when her car, a 2005 Chevrolet Monte Carlo, struck Christ.

Christ was in a marked crosswalk at the time of the accident, Savino said.

Savino said officers checked Christ’s identification at the scene and confirmed it was his legal name."

As one commenter notes, "Christ will be okay. He's survived worse."

Previous Post: « Henry Rollins and Glenn Danzig Drawn Up as Gay Lovers
Next Post: The Boys of Made in Brazil Go Offline (with a Magazine) »