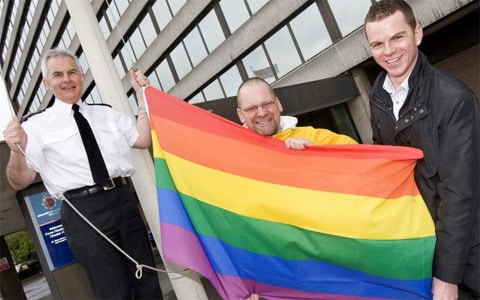 The police force in Manchester, England stands strong with the LGBT community, and raised the rainbow flag yesterday on the International Day Against Homophobia (IDAHO):

"Assistant Chief Constable Terry Sweeney raised the rainbow flag at Chester House, the Greater Manchester Police HQ, saying there was 'still a great deal of prejudice to be tackled'.

The Union Jack remained in place on the second flagpole outside the building in Old Trafford.

It is the second year GMP hoisted the flags.

Mr Sweeney said: 'This shows Greater Manchester Police's commitment to ensuring everyone can feel safe in Greater Manchester.  We know from the number incidents there is still a great deal of prejudice to be tackled, but we are determined to show our support for anyone who feels they have been targeted by hate crime.'"

Wouldn't it be nice if all cities were as supportive.