Ellen Page will star in a big screen adaptation of Cynthia Wade's award winning short documentary Freeheld, which told the story of Detective Lieutenant Laurel Hester's struggle with Ocean County Freeholders to transfer her pension to her partner Stacie Andree following a diagnosis of terminal cancer. 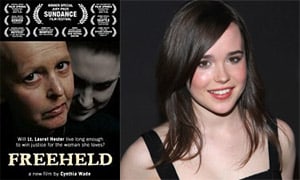 "Ron Nyswaner, an Oscar nominee for "Philadelphia," is writing the screenplay based on the true story of New Jersey car mechanic Stacie Andree, who'll be played by Page, and her police detective girlfriend Laurel Hester, who both battled to secure Hester's pension benefits after she was diagnosed with a terminal illness.

Wade's doc won the Oscar for best short documentary in 2008.