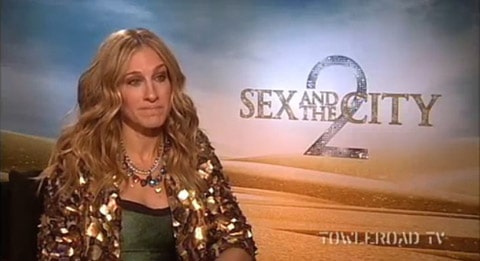 Our Towleroad correspondents Josh Helmin (interviewer) and Josh Koll (editor) put together a brief clip for us with the Sex and the City 2 women.

Helmin asks Sarah Jessica Parker about her first gay friend, who she says is no longer with us.

Says Parker: "There seems to be, of concern to me, young men that are now sick again, or are HIV positive, and I think that because they were too young to see what happened 20 years ago, to know the devastation and the absolute heartbreak that accompanied that time."

Helmin asks the four stars of the film about marriage equality, given that there's a gay wedding in the film. Kristin Davis is extremely excited that Laura Bush is on board.

And coming up shortly, Nathaniel Rogers' review of the film.