Vice President Joe Biden appeared on Good Morning America this morning to discuss Obama's nominee Elena Kagan. He was asked about the Solomon Amendment and DADT. 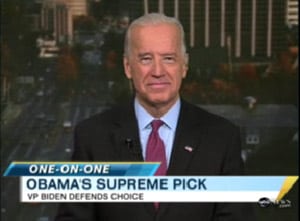 Said Biden: "She was right. … Let me put this in perspective. For 20 years before she came there military recruiters were not allowed on the campus in the same way that other recruiters were.  Then we passed a law called the Solomon Amendment before she got there saying you had to allow military recruiters on, you couldn't do that. So military recruiters were on. Then in fact what happened was the Third Circuit Court of Appeals said Solomon Amendment is unconstitutional. She was then Dean. She went back to the previous 20-year practice at Harvard. 20 plus years. Then the Supreme Court said the Solomon Amendment saying they have to be allowed on campus is correct — she immediately reinstated them. All during that period, she has reached out to veterans in the law school, she has been at promotions ceremonies, she's recognized veterans coming to the law school. So this is not a single bit of anti-military bias. She does think, and I agree with her, that the don't-ask-don't-tell policy is a very bad policy."

In unrelated news, Biden's son Beau was hospitalized this morning for unknown reasons.