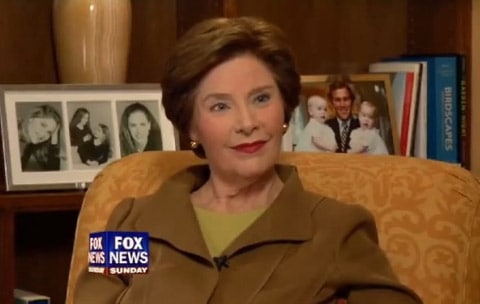 In an interview with Fox News Sunday, former First Lady Laura Bush reiterated the sentiments she expressed to Larry King on same-sex marriage (starts around 12:30):

“It’s a very, very difficult issue for very many people, because the marriage between a man and a woman is so fundamental to our civic life for all of our history, for the history of humans. And it's a debate that I think people want to have, and I hope they have it in a way that protects people…And in many ways, I think it’s generational and that gay marriage will come. I’m okay with that.”

Bush is also asked about "Don't Ask, Don't Tell". She says she doesn't have an opinion on that.

She also spoke about 9/11, Michelle Obama, women's rights, Karl Rove, Elena Kagan (she likes her), and the Arizona immigration law.