Yuma, Arizona mayor Al Krieger has been getting a lot of much-deserved heat for his ridiculous comment during a Memorial Day speech wherein he stated "I cannot believe that a bunch of lacy-drawered, limp-wristed people could do what those men have done in the past." He then went on to defend his statement by claiming that both George Washington or Abraham Lincoln would agree with his stance. 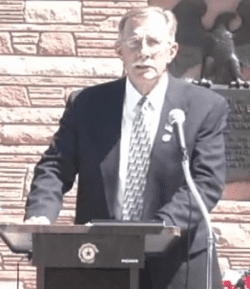 Well, yesterday came the tepid apology. According to the Yuma Sun, said Krieger:

“As mayor I must respect the lifestyle choices of others, no matter how disagreeable they are with my personal beliefs or my personal moral standards. I apologize for my comments at the Memorial Day service at Desert Lawn cemetery on Memorial Day.”

Yuma gay activist Michael H. Baughman points out that Krieger's apology was less than heartfelt: “It's rather self-serving in some respects and it really doesn't go quite far enough. He is apologizing because he needs to as the mayor, but he has obviously made no effort to really get to know anybody (in the gay community). He should have left out the part about his own personal beliefs … because he is the mayor of Yuma. He should have just apologized. Your personal beliefs have no business in the public forum.”

As for those references to President Washington and Lincoln, Baughman says: “History records prove Gen. Washington sent Benjamin Franklin to Paris to meet with the openly homosexual Prussian military genius Lt. Gen. Frederick Von Steuben, to ask him to come and train the American troops. Von Steuben arrived at Valley Forge, that cold winter of 1778, with a young French nobleman who was his ‘assistant' and lover … It is unlikely that Gen. Washington, engaged in founding a nation, had the time or inclination to concern himself with who was sleeping with whom.”