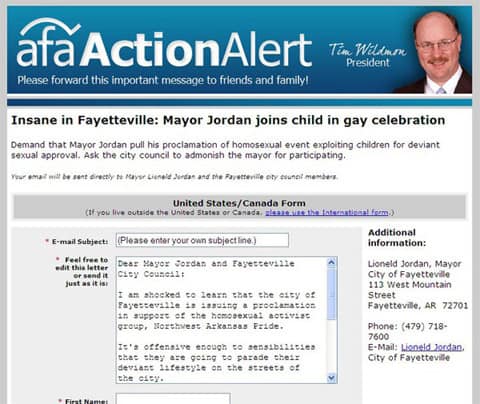 The American Family Association's Tim Wildmon is lashing out at Fayetteville, Arkansas Mayor Lionel Jordan for issuing a proclamation in support of the Northwest Arkansas Pride Parade, and attacking 10-year-old Will Phillips and his parents for participating, AfterElton reports. 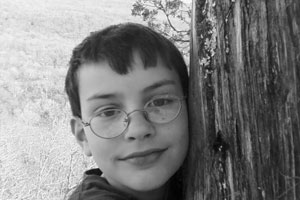 Says the letter in the alert: "“Dear Mayor Jordan and Fayetteville City Council:I am shocked to learn that the city of Fayetteville is issuing a proclamation in support of the homosexual activist group, Northwest Arkansas Pride.It’s offensive enough to sensibilities that they are going to parade their deviant lifestyle on the streets of the city.It’s even more abhorrent that the city is supporting it, knowing very well that the organizers of this event are exploiting children to push their radical sexualizing event.I implore you to withdraw the proclamation and focus on issues that promote a healthy and safe lifestyle, rather than one that is risky and dangerous…"

I posted an interview with Phillips yesterday. The 10-year-old hero is to be this year's Grand Marshall for speaking out across the country for equality for all.

Writes Wildmon: "It’s shameful that adults would abuse a brain-washed child in this way. He’s obviously just parroting the nonsense he’s been told by manipulative adults.For gay activists to trot out this child and make him the poster child for promoting unnatural sexual expression is a form of child abuse."

A list of Fayetteville officials (via AfterElton) you can write (politely) to express your support for Phillips, Mayor Jordan, and NW Arkansas Pride, is AFTER THE JUMP…