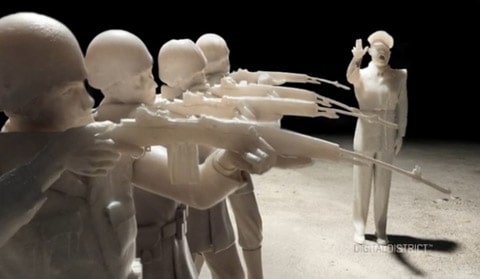 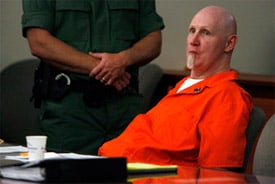 "A death row inmate who had used a gun to fatally shoot two men suffered the same fate Friday morning as he was executed by a team of marksmen – the first time Utah used the firing squad to carry out a death sentence in 14 years.A barrage of bullets tore into Ronnie Lee Gardner's chest where a target was pinned over his heart. Two minutes later an ashen Gardner, blood pooling in his dark blue jumpsuit, was pronounced dead at 12:17 a.m.He was the third man to die by firing squad since the U.S. Supreme Court reinstated capital punishment in 1976…The five executioners, certified police officers who volunteered for the task and remain anonymous, stood about 25 feet away, behind a wall cut with a gunport, and were armed with matching .30-caliber Winchester rifles. One was loaded with a blank so no one knows who fired the fatal shot. Sandbags stacked behind Gardner's chair kept the bullets from ricocheting around the cinderblock room.Utah Department of Corrections Director Thomas Patterson said the countdown cadence went '5-4-3…' with the shooters starting to fire at the count of 2…"

Watch a new Amnesty International spot, called 'Death to the Death Penalty',
AFTER THE JUMP…