In his column in the NY Times today, Frank Rich makes note about David Blankenhorn, a so-called marriage expert, called to the stand by Prop 8 supporters in the federal case in California. Blankenhorn is president of the Institute for American Values, a wingnut organization "devoted to contributing intellectually to the renewal of marriage." 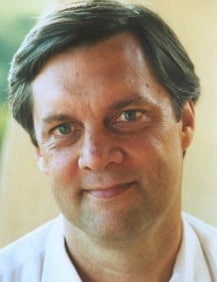 Blankenhorn holds no degree in such seemingly relevant fields as psychology, psychiatry or sociology. But his pretrial research did include reading a specious treatise by George Rekers, the antigay evangelist now notorious for his recent 10-day European trip with a young male companion procured from Rentboy.com. And Blankenhorn’s testimony relies on the same sweeping generalization as Rekers — that children raised by two biological parents are so advantaged that all alternatives should be shunned.

What was the unqualified Blankenhorn doing at the Prop 8 trial? Like Rekers, who had a lucrative history of testifying for pay in legal cases attacking gay civil rights, he also profits from his propaganda. Public documents, including tax returns, reveal that Blankenhorn’s institute, financed by such right-wing stalwarts as the Bradley and Scaife foundations, paid him $247,500 in base salary in 2008, the most recent year for which data is available, and another $70,000 to his wife. Not a bad payday for a self-professed arbiter of American marital values who under oath described his sole peer-reviewed academic paper (from the University of Warwick) as “a study of two cabinetmakers’ unions in 19th-century Britain.” That the Prop 8 proponents employed him as their star witness suggests that no actual experts could be found (or rented) to match his disparagement of gay parents.

Closing arguments for the trial on Prop 8 will take place on Wednesday. Judge Vaughn Walker, who is presiding, has requested that lawyers on both sides answer 39 questions he has produced before then.

Previous Post: « Roy Ashburn Opens Up To The The LA Times
Next Post: Joe Hart Receives Underwear From His Gay Fans »