The LA Times snagged California State Senator Roy Ashburn
for a lengthy and candid interview about his life before and after his infamous DUI arrest earlier this year and subsequent forced coming out. In the piece, Ashburn claims that the constituents in his conservative district were "shocked…to the core" by the revelation that he is gay. 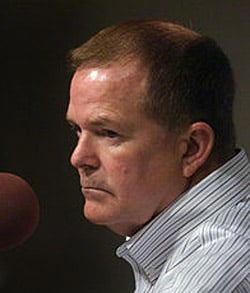 He's asked about his anti-gay voting record and while he apologizes, he does confess that he voted that way to prevent anyone from finding out about his sexual orientation. Said Ashburn:

"The best I can do is to say that I was hiding. I was so in terror I could not allow any attention to come my way. So any measure that had to do with the subject of sexual orientation was an automatic "no" vote. I was paralyzed by this fear, and so I voted without even looking at the content. The purpose of government is to protect the rights of people under the law, regardless of our skin color, national origin, our height, our weight, our sexual orientation. This is a nation predicated on the belief that there is no discrimination on those characteristics, and so my vote denied people equal treatment, and I'm truly sorry for that."

Ashburn also reveals what he believes to be the moment in his young life that initially sparked him to remain a closeted man all this time.

"Something happened that I guess caused me to realize that. When I was in sixth grade, the police had a raid in the sand dunes [near San Luis Obispo] and a bunch of gay men were arrested, probably charged with indecent activity. That sticks in my mind — the publicity and the shame around it. One of my teachers was one of the people. The talk among the kids, the talk among the adults, the talk in the community, the press — at that time the choice was pretty clear: If you were gay and open, it was a life of shame, ridicule, innuendo about molesting and perversion. It was a dark life. Given that choice of whether you come out or whether you're in secret, I mean, there really wasn't a choice."