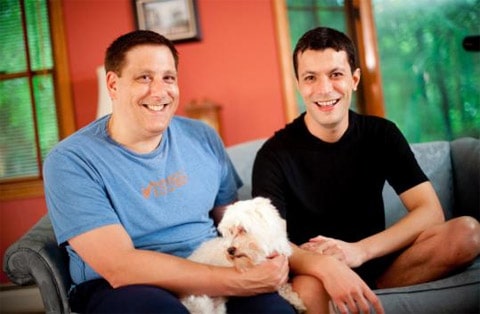 In March 2009, I posted about Tim Coco and Genesio Oliveira, who were married in Massachusetts in 2005, but were separated in 2007 after Oliveira's requests of asylum were denied and he was forced to return to Brazil. Because the federal government does not recognize same-sex marriage, foreign spouses of gay married citizens are not protected under immigration laws.

Back in 2009, John Kerry was trying to help the couple. It appears to have worked, at least for the time being, the Boston Globe reports:

On Wednesday, Oliveira returned to Massachusetts for an emotional reunion after federal immigration officials took the rare step of granting him permission to stay for one year on humanitarian grounds, clearing the way for him to try again for legal residency. His return followed personal appeals by Senator John F. Kerry, US Attorney General Eric Holder, and Homeland Security Secretary Janet Napolitano on their behalf.

“We’re overjoyed. Words can’t express it,’’ Coco, 49, an ad agency owner, said yesterday from their home in Haverhill, where he had decorated his yard with yellow ribbons to mark their long separation. “Every new moment now is a fresh new moment in our life.’’

Kerry called the couple heroes for persevering in their marriage.

“Here were two people who loved each other and were as committed to each other as you could ever imagine, and a quirk in the law was being allowed to keep them apart. I just wanted to do everything I could to reunite them,’’ he said in a statement.

Kerry also praised Napolitano and Holder, saying, “They really listened, and they righted this wrong.’’ Unlike heterosexuals, gays and lesbians cannot sponsor their immigrant spouses for legal US residency.

Cases like these are why passage of the Uniting American Families Act is so vital. As well as the repeal of DOMA, which prevents the federal government from recognizing anything other than a heterosexual marriage.