John Podesta, founder and president of the Center for American Progress, and Robert Levy, chair of the Cato Institute, announce they'll co-chair the Advisory Board of the American Foundation for Equal Rights (AFER), the foundation whose case, Perry v. Schwarzenegger, is challenging Proposition 8 in federal court. 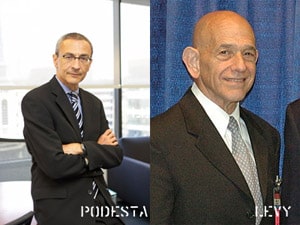 They make a case for marriage equality, in a joint Washington Post editorial:

"Now, 43 years after Loving, the courts are once again grappling with denial of equal marriage rights — this time to gay couples. We believe that a society respectful of individual liberty must end this unequal treatment under the law…Although we serve, respectively, as president of a progressive and chairman of a libertarian think tank, we are not joining the foundation's advisory board to present a 'bipartisan' front. Rather, we have come together in a nonpartisan fashion because the principle of equality before the law transcends the left-right divide and cuts to the core of our nation's character. This is not about politics; it's about an indispensable right vested in all Americans…Our history will soon be written by young people who are seizing the reins from the baby boomers. They seem prepared to reject laws that serve no purpose other than to deny two committed and loving individuals the right to join in a mutually reinforcing marital relationship.

The decision in Perry depends, of course, on values far more permanent and important than opinion polls. No less than the constitutional rights of millions of Americans are at stake. But the public appears to be catching up with the Constitution. Just a little more leadership from the courts would be the perfect prescription for a free society."

Closing arguments by Ted Olson and David Boies in the federal challenge to Proposition 8 are scheduled for next week, June 16.