Reuters reports on the defense's stunning statement that they did not need any evidence to prove the purpose of marriage: 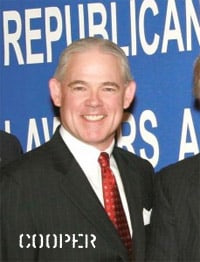 Conservative Charles Cooper led the defense, arguing that it is reasonable to fear that allowing same-sex marriage would undermine heterosexual marriage and self-evident that the purpose of marriage was procreating and raising children.

"You don't have to have evidence" to prove that the purpose of marriage is to bear and raise children, he said in the closing arguments, citing legal precedents.

Months earlier, he had surprised the court by saying he did not know how gay marriage would hurt heterosexuals — and that he did not need to know in order to win the case.

"At the end of the day, 'I don't know' and 'I don't have to present any evidence,' with all respect to Mr. Cooper, doesn't cut it," responded Olson on Wednesday.

Walker subjected Cooper to a barrage of questions, turning the lawyer's closing arguments into a cross-examination about the purpose of marriage, the state's role, and whether gays deserve special court protection akin to racial minorities.

Cooper contended that the only way to invalidate Prop 8 was to prove there had been absolutely no good reason, or rational basis, for millions of Californians to back it.

"Chuck Cooper is a heckuva lawyer. At stake in this case is the future of marriage in all 50 states, and he's right that this attempt to shut down the debate by constitutionalizing gay marriage will backfire. Americans have a right to vote for marriage. Ted Olson doesn't seem to understand the argument, and judging from today's exchanges neither does Judge Walker. I expect Judge Walker will overrule Prop 8. But millions of Americans do understand why marriage is the union of husband and wife and I believe the majority of the Supreme Court will as well."

Here is the official transcript from yesterday's closing arguments: