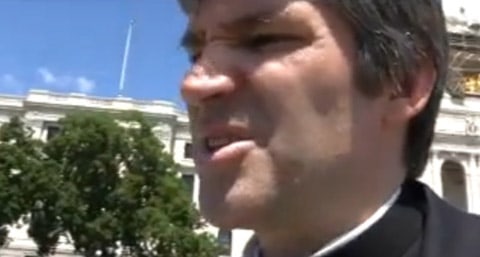 He adds: "If you want to get to the nuts and bolts of it in the male homosexual world, I think the most heinous act is anal sex. Now, if anybody were to think about that in truth, they would say one person is being harmed by this act, which is why there are so many gastrointenstinal afflictions that come to many homosexuals that do this, and other kinds of afflictions. When you look at that individual act, you say, 'Did God create that? No way.' And would you ever want one of your children or grandchildren to be submitted to that kind of act? No."

Father Becker gets very flustered when he's asked if he's ever had a homosexual thought. I wonder why.