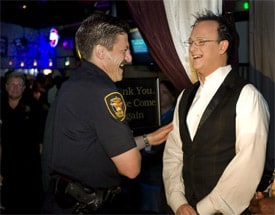 "On Tuesday, speakers said the city went too far and didn't take their Christian beliefs into account.
'I believe the media and the GLBT community has distorted the facts of what happened on the night of the Rainbow Lounge to promote the homosexual agenda,' said Richard Clough, a former candidate for county judge who is an associate minister at Kenneth Copeland's Eagle Mountain International Church.
Perfeto Esquibel, a minister at the Christian Worship Center of Fort Worth, said most of his congregation felt left out of the discussions.
'We're just finding out about it,' he said.
Mayor Mike Moncrief said the city's response had broad support. Fort Worth is 'a city of inclusion,' he said.
Thomas Anable, who was at Rainbow Lounge on the night of the arrests, said the subsequent policy changes helped polish the city's image.
The attitude of the speakers Tuesday night 'shows [city leaders are] still taking heat for doing the right thing,' he said."