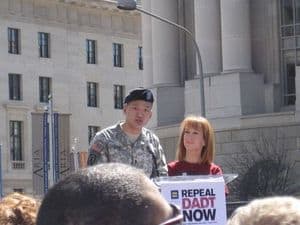 Griffin's trip to D.C. for a Human Rights Campaign rally on "Don't Ask, Don't Tell" was well-publicized earlier this year after it was crashed by GetEQUAL activists and Lt. Dan Choi, who left Griffin and HRC President Joe Solmonese in the dust by continuing down the road to make the real headlines at the White House with activism that felt more visceral and effective — chaining himself to the White House fence and getting arrested.

Tuesday's episode is worth watching more as an exercise in the meta-rituals of the typical Washington celebrity-advocate visit, and how such photo ops fail to accomplish much. While Griffin's trip feels "behind the scenes," it is in fact just another manufactured scene.

She revels in playing the faux-naif, unaware of the basic branches of government. Thus, King and Bash come by Griffin's room at the Mayflower Hotel, to school her on the concept of a majority whip. (S&M jokes ensue, and fizzle.)

She leads a noontime rally on Freedom Plaza. She is bossed around by staffers at the Human Rights Campaign, who are seen here doing what they do best, which is attempting to micromanage the gay rights movement. "The HRC has been fighting for gay rights since I was calling gay bingo at Hamburger Mary's," Griffin quips, on her way to accept an ally award at one of the group's many fundraising banquets.

At HRC's Rhode Island Avenue NW headquarters, Griffin is run through talking points on the DADT debate. Every time she tries to crack a joke, her Washington handlers pretend to glower at her. Accompanied by HRC head Joe Solmonese to Frank's office, Griffin tells the congressman that "I need [DADT] to be repealed by Thursday, because I'm leaving Friday" and if it's not, "that's a bitter pill to swallow."

"My guess, Kathy, is it's not the only pill you've swallowed this week," the Massachusetts congressman replies. The air in the room goes staler than normal.

Though I'm a big Kathy Griffin fan, I fear she was using HRC here (at the same time HRC was using her) and nobody gained from it.