The National Organization for Marriage brings its 23-city hate-a-palooza tour to Trenton, NJ today. I wonder if the bullies with rainbow umbrellas will show up? 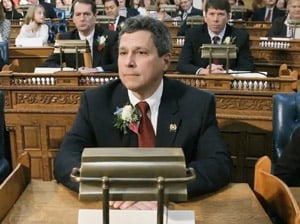 Garden State Equality released the video today, when the anti-LGBT "National Organization for Marriage" holds a rally against marriage equality at the State House in Trenton, part of its national anti-equality tour.

To further counter the "National Organization for Marriage" rally, Garden State Equality is holding a town meeting at the State House today at 11:30 am, in Committee Room 6 of the State House Annex, featuring same-sex couples and their children talking about the effect being denied marriage equality has on them. The town meeting is part of a national pro-equality tour organized by Freedom to Marry, Garden State Equality's national counterpart, to counter the national anti-equality tour.

The moderator of Garden State Equality's town meeting will be Mary Jean Weston, MSW, LCSW, assistant executive director of the National Association of Social Workers-New Jersey. Also at the town meeting will be Hayley Gorenberg, deputy legal director of Lambda Legal, and Maritza Braswell, attorney at McCarter & English, New Jersey's largest law firm. Lambda Legal is currently seeking marriage equality in a lawsuit before the New Jersey Supreme Court. McCarter & English prepared Garden State Equality's amicus brief in the lawsuit – a brief focusing on the devastating psychological impact the deprivation of marriage equality has on children with same-sex parents and on LGBT children themselves.

In fact, the families at Garden State Equality's town meeting today are real families from across New Jersey experiencing real pain. In contrast, the families featured in photos on the side of the National Organization for Marriage's anti-equality tour bus are actors in stock photos available for purchase on line, as revealed by Jeremy Hooper of the blog Good As You.