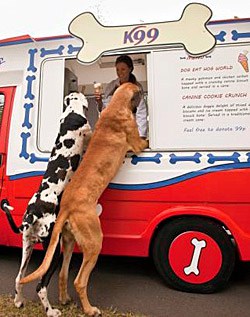 Dogs get their own ice cream truck in the UK. Flavors include dog eat hog world — a gammon [ham] and chicken sorbet topped with a biscuit and served in a cone, and canine cookie crunch — a combination of mixed dog biscuits and ice cream.

BP posts Photoshopped image of crisis command center. And another.

Funny or Die is pitching a show where celebrities go undercover to karaoke bars and other public places.

L.A. journalist Karen Ocamb wonders why nobody showed up to the Log Cabin Republicans' DADT trial: "Was driving to hot Riverside just too inconvenient? Does the fact that the plaintiffs are gay Republicans play a role in LGBT and civil rights groups ignoring the case? Would there be a similar deafening silence if the plaintiff was photogenic Lt. Dan Choi or some fire-breathing progressive who wanted to stick it to President Obama, the Pentagon or the Department of Justice?
What does it say about the real principles of the LGBT movement for equality that no one but three local LGBT activists, a couple of Log Cabin members from Palm Springs and a handful of reporters showed up for part one of this trial?"

An interview with Jujubee about RuPaul's Drag U. 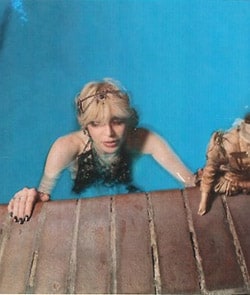 Courtney Love has started writing a blog about what she wears.

Michigan gay rights group endorses Lansing mayor Virg Bernero for governor: "Democratic gubernatorial candidate Virg Bernero says the discrimination his gay brother faced before dying of AIDS is one reason he strongly stands up for gay rights…Bernero supported a 2006 human right ordinance in Lansing that bans discrimination based on sexual orientation and gender identity and supported similar measures as a state lawmaker.
His brother, Victor, died of AIDS in 1990 at age 29."

Stephen Fry unveils new BBC TV series on language: "Language is my real passion. So, I'm going to Beijing to interview the man who invented Pinyin, a phonetic version of the Chinese language. He's 105 years old … if he dies on me I'm going to be so annoyed." 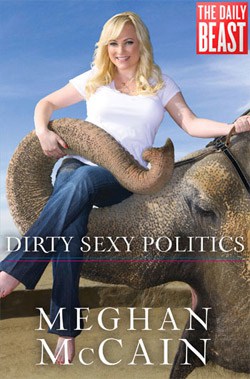 Meghan McCain hops on elephant for new book about Republicans and dirty sex.

Sun-Sentinel: U.S. falling further behind on gay rights. "Argentina now joins Canada, South Africa, a handful of nations in western Europe, several states of the United States and the District of Columbia in recognizing that the full rights and privileges of marriage ought to apply to all people, regardless of sexual orientation.

Sadly, the United States, which has traditionally been at the vanguard of human rights developments, finds itself falling behind in one of the great trends of human history."

Anti-aircraft laser shoots down plane in test for the first time.

Gays in rural Ireland isolated: "Despite recent progress for LGBT people in Ireland, a significant number still find it difficult to be 'out' and remain living in their local communities. Much of this is the result of a lack of recognition that all communities are made up of people who are lesbian, gay, bisexual and transgender. Many LGBT people migrate towards Dublin or other cities because they feel they cannot play a full role in the community in which they were born and raised."

Previous Post: « When Your Kid Likes Barbie Instead of G.I. Joe
Next Post: Towleroad Guide to the Tube #699 »