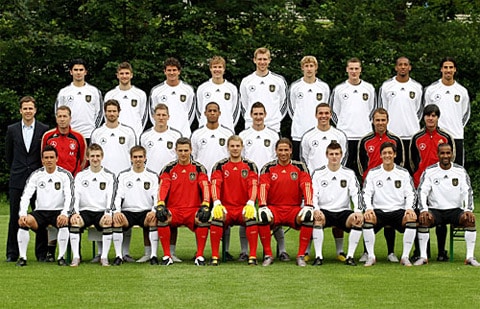 German football agent Michael Becker, agent to top footballer Michael Ballack, is making sports headlines across Germany after an interview was published in which he attributed the elegant style of the World Cup team to the fact that "a bunch" of its players are gay.

In an essay entitled New German Men, Aleksander Osang recounts an interview he had with Becker prior to the World Cup in which the agent allegedly told him which of the players in the team were gay. He later said that a former national player was ready to reveal the "bunch of gays" in the German team, according to Osang. Asked about the sexuality of one of the newer players, Becker, who is a lawyer by profession, referred to him as being "half gay".

Osang went on to say that Becker put the new adroit, lighter and elegant style of play that has become a trademark of trainer Joachim Löw's players down to their homosexuality, in contrast to the typically more aggressive and offensive German style of past years, but suggested they played too delicately to assure themselves a place in the final.

According to Der Spiegel, when Becker made his remarks about the "bunch of gays" he expected the ears of fellow journalists present to "prick up". "But they only nodded placidly," said Osang. "All sports journalists seemed to already know the alleged homosexual conspiracies enveloping Löw's team. The rumours accompanied our team to South Africa and evidently belong to the team."

Germany came third in the World Cup, going further than expected, after an excellent run that included wins over England and Argentina.

Becker responded to the controversy: "Becker has neither denied nor confirmed that he made the comments, but has since said he was 'misunderstood' and that the interview was not 'authorised', a common journalistic practice in Germany whereby the interviewee has the right to change his remarks after the interview.

Osang said he stood by his article, saying that Becker had told him 'unbelievable stories that I took down in my notebook and Becker didn't seem to have anything against me doing so'."

Michael Ballack did not play in the World Cup due to an injury.